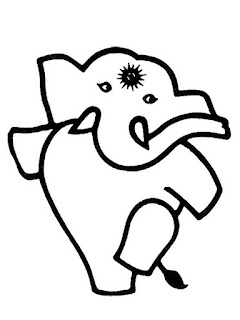 In the time machine once again, this time to witness the naming of elephant. Our ancestors are amazed to see a unique animal with a “hand” in addition to four legs! It picks its food with 'hand' and puts in its mouth. It is also using the 'hand' for drinking water. Absolutely amazing! The wise in the clan decide to use HAST (हस्त), the Sanskrit word for hand to name the animal as HASTI (हस्ती). HASTI is conveyed to future generations as HATHI after simple mutations:
HASTI हस्ती (Sanskrit)
HAHTI हहती
HATHI हाथी (Hindi)

But the HATHI also gets a nick name. Its fatness is a phenomenon for our ancestors. Some of them talk about this animal not for possession of a ‘hand’ but for being fat. The Sanskrit word PHULLA means dilated, expanded, blown. PHULLS and its variations are used as nick-names that keep changing and become very popular.

c.1300, olyfaunt, from O.Fr. oliphant, from L. elephantus, from Gk. elephas (gen. elephantos) "elephant, ivory," probably from a non-I.E. language, likely via Phoenician (cf. Hamitic elu "elephant," source of the word for it in many Sem. languages, or possibly from Skt. ibhah "elephant"). Re-spelledafter 1550 on L. model.