Why is the sequence of alphabets ABCD…? 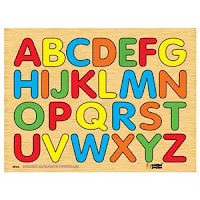 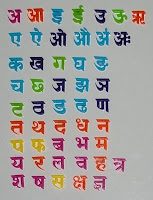 It is shown here that the ABCD sequence of the English letters has a hidden phonological order similar to that in the Devanagari script used for Sanskrit, Hindi and other Indic languages. It is proposed that some ancient Indic phonetic alphabet table such as that of the Brahmi script probably degenerated into a linear sequence of Phoenician alphabets which evolved with few changes to European, and West Asian and African scripts.
______________
The English alphabet has the typical singsong sequence ABCDEFG. It has always intrigued the linguist and the layman that there is no apparent reason for this ABCD alphabetic order. It is believed that even 2800 years ago a minor variation of the ABCD order of sequence was in use in the Phoenician script and that it has been passed on with few changes to European, Semitic and African scripts (1,2,3).   Most of the Indic languages are written in the Brahmi / Devanagari script group (Indic scripts). The letters in the Indic scripts are arranged in a well-defined phonological order (4-5). The Brahmi / Devanagari phonological order is used in several scripts in South Asia, Tibet, Korean hangul and Japanese kana. It is believed that the phonological order found today in Devanagari was known in Brahmi script even 2500 years ago in the times of Panini, the great Sanskrit grammarian (6).

Letters/ VARNA in Devanagari are arranged in tables. The Devanagari VARNMALA वर्णमाला (table of the letters) consists of four major groups, viz. vowels, consonants, semivowels and fricative consonants. Letters in each group are placed according to the place from where they are generated in the vocal tract, namely guttural, palatal, cerebral, dental or labial. Letters in each sub-group are further arranged in the sequence of being un-aspirated voiceless, aspirated voiceless, un-aspirated voiced, aspirated voiced and nasal. There is a gradation of sound in letters of each group, e.g. the all the sounds of the in the pa-group (pa-varg in Sanskrit) viz. pa, pha, ba, bha, and ma originate in subtle variation of the lip movements.

On writing the English letters in the phonetic format of Devanagari, an interesting table of letters with an unmistakable periodicity of sounds begins to appear (Table 1), i.e. the letters / VARNA of the Devanagari table appear in the ABCD sequence of English at nearly regular periodicity.


Table 1. The English letters arranged according to the phonetic principle of the Devanagari VARNMALA  or table of letters.
The first number in each box refers to the order of sequence of the English letters. The last line in each box show that periodicity in the ABCD sequence at which a letter appears in the same phonological column with reference to the previous letter in the same column. Equivalent letters of the Devanagari scripts are also shown along with the English letters.
*not considered to be independent letter in Devanagari.
Note that to unravel the phonetic orderliness, the sequence of English letters had to be changed only at two places: (a) GH to HG and (b) XYZ to ZXY. The salient features of the newly generated table of English letters are as follows: (1) all the vowels are placed in the first column, (2) all the consonants in a particular column are produced in the mouth in the similar way: palatal, labial etc., (3) the average periodicity of appearance of letters of a phonetic group in the ABCD sequence is 5, 4.7 and 5.7 for vowels, labials and gutturals respectively.

The phonetic classification of letters in the Devanagari VARNAMALA has a strong parallel in the world of chemistry. Till the early 1860s, students of chemistry had to remember the names of 56 elements known till that time. Elements were not listed in any particular sequence. In 1869, Dmitri Mendeleev bought order to the list of elements by rearranging them in a table on the basis of periodic occurrence of similar chemical properties (7). Reminiscent of the Mendeleev’s periodic table of elements, there are holes in the periodic table of English letters. The holes in the Mendeleev’s table were used to predict properties of undiscovered elements that were eventually discovered. The holes in the table of English letters presented above are the places vacated by letters that have been deleted over the years, e.g.  þ (thorn), Ð (eth), Ƿ (wynn) and Ȝ (yogh); or the letter that need to be incorporated in the script in order to make it a perfect vehicle to express all sounds. It may be pointed out here that the Devanagari has 14 different vowels and 38 consonants as compared to five vowels and 21 consonants in English. There are only three dental consonants (D, T, N) in English as compared to five in Devnagari. Five cerebral consonants are also missing in English.
Notwithstanding the holes in the table, the hidden phonological order in the English letters raises questions about its origin. Is the hidden order a mere coincidence or a part of some planned design by the ancient linguists? Based on the periodicity of phonological properties in the English alphabetic order, it is tempting to speculate that a phonologically structured Brahmi alphabetic table might have degenerated in ancient times into the ABCD sequence in three steps:
(a) reshuffling of the sequence of columns in the process of memorisation
(b) loss of letters that were not required in the western languages
(c) memorising the rows of letters instead of the phonological columns.