Animal Names-1: How did donkey get its names 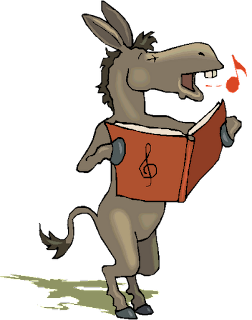 We are starting a long journey with our ancestors. It is like going back in a time machine to as far back as 200,000 year in human history to find out why and how our ancestors created the first words and how these words underwent repeated mutations in their passage to us. It is also like going on a biological expedition in the past to experience the magic moments when our ancestors encountered a new plant or an animal and needed a word to communicate that experience to other members of their population.  Let’s imagine the feelings of our ancestor at their first view and experience of a donkey braying denchu-denchu melodiously! How would they have described the experience to the others?  Perhaps by repeating the sound denchu-denchu just as a child mimics bho-bho or meon-meon of dog and cat respectively. And how the new word would have been transmitted down the generations? 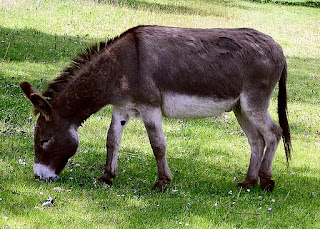 Ass, the synonym for donkey seems to be a degeneration of Ashva (अश्व), the Sanskrit word for horse. Looks like a case of mistaken identity by some ancestors who were not very familiar with the horses.

Khar (खर) is another name for donkey in Sanskrit and Hindi. Its derivation seems to be from Kshar ashva (क्षार अश्व) which means horse of the sea salt: Kshar ashva > khar asya > khar ahya > khar. The only place in the world where the ass is found in the wild is the Great Rann of Kutch, which is salt Marsh located in Gujrat, India and Sindh, Pakistan.

It is interesting to note that it took three mutations to get the English word donkey from the natural sound dhenchu but seven, nine and ten mutations respectively to get Hindi GADHA, Sanskrit GARDHABH and Punjabi KHOTA! The original home of donkey is in Africa.  The donkey must have travelled a lot more to reach India than it did to reach Europe. Note that almost all the mutation shown in the probable etymology of donkey and its synonyms take place in the same phonetic group of letters of the Devanagari alphabet table.

You may also like to see what the linguists have to say on how donkey got its names: