A Biological View of the Origin and Evolution of Languages – I: How Many Centres of Origins? 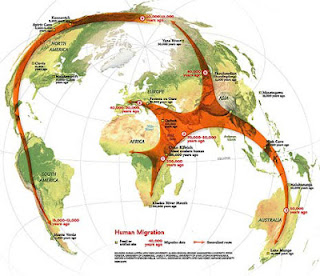 One of the most significant philosophical-cultural lessons from biology is the unequivocal proof of the oneness of all forms of life. Modern advances in molecular biology have gone a step further. We now know that, in the ultimate analysis, all plants, animals, bacteria and fungi have a common ancestry! What about the relationships among human beings of various races? Evolutionary trees based on variations in human mitochondrial and Y-chromosomal DNA sequences have been constructed and it has been proved that all human beings belonging to diverse ethnic backgrounds have a common ancestry. We know now that the first human beings began their journey in jungle of Africa. The molecular biologists have given us a fair idea of the migration routes of human species in the past several millennium.

Therefore, it would be logical to say that as a corollary to ‘all human beings related through common ancestry’ all the 7000 languages being spoken and many others that have become extinct should also be related through common ancestry. However, the majority of linguists do not believe in a common origin of languages due to the absence of any ‘fossils records.’  Amongst the linguists there is consensus on multiple centers the origin of human languages as well as on the presence of 17 distinct language families. Attempts have also been made from time to time to arrange all the languages in evolutionary trees, first constructed by the 19th century linguist Augustus Schleicher. Prima facie, the tree of biological evolution as worked out by the molecular biologist should correspond to the tree of language evolution as traced by the linguists and the migration routes of the human species worked out by the biologists and the linguists should also overlap. However, a comparative study of the biological and linguistic evolution trees and migration routes reveals perplexing non-correspondences as well as some unexplained gaps.
(To be continued)